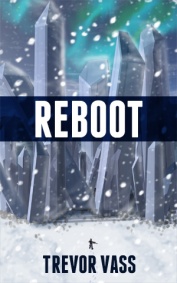 The Universe is a humbling place, at least it always has been for Jack, an elite member of the Galactic Survey Group tasked with blazing a trail for humanity among the stars. He’s the best that Earth has to offer but, even with billions of nanobots fortifying his body, death is frequent and inevitable.
Being the best has its perks though. When he dies, Jack’s bots restore him to health and “Reboot” his brain to get him back in the action. So on a normal day, Jack wouldn’t sweat the four-inch holes that left him bleeding out onto an icy snow drift thirty light years from home, it’d be just another day at the office.

Unfortunately, today is far from normal. Elizabeth, a field researcher and the only woman Jack has ever loved, is on the run from the terrors that laid him low. On her first mission off-world, Elizabeth has yet to earn her bots and must survive on her own. If she is to have a chance, Jack must push through death once again and hope he can find her before the inevitable does.